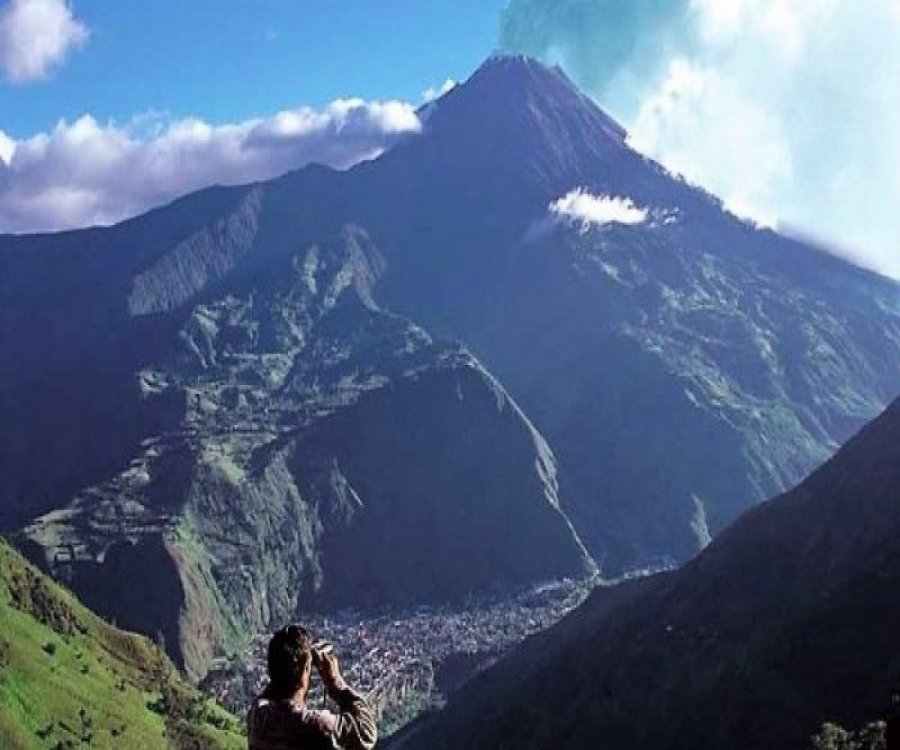 In Baños de Agua Santa you can visit different tourism activities, where the harmony of nature meets the beauty of the city.

The most known viewpoints are:

A site with a privileged view this viewpoint gives you the beauty of Baños de Agua Santa and its surroundings.

It is located in the sector of Bellavista, Runtún, in the place you can admire a panoramic view of the city of Baños de Agua Santa, at this point you can see the beauty of Windows, and even a part of Runtún, Loma de Chontilla said sector is known as the Board.

As it is outdoors, it has no cost or schedule.

How to get to the Mirador?

From the terrestrial end, take Pedro Vicente Maldonado street to the path and continue for about 30 minutes until you reach the viewpoint. It is optional to arrive at the place with the use of the bicycle.

By vehicle, you leave the land terminal in the direction of Puyo, take the deviation to Runtún until you reach the road that leads to the viewpoint. For visitors or tourists there is a clear signal to be guided.

Viewpoint of the Virgin of Windows

From the Baños de Agua Santa center, we went to Montalvo Street and Juan León Mera where our adventure began, climbing several hundred steps for about 20 minutes to be able to look at the city from the West to the East, that is, pointing to the Amazon, where the sun rises.

This gigantic sculpture was assembled in pieces brought by helicopter, it is Italian marble from "Carrara" that a devotee donated to the city for a miracle received. This Virgin protects the city from the fury of the volcano, which has been faithfully fulfilled, because the city of Baños de Agua Santa in 16 years of continuous eruptions has never been affected, except for a few falls of ash that its inhabitants clean neatly, while in other places the fall of ash is permanent, abundant and really causes serious problems, including the suspension of flights. This "miracle" of not falling ash to a city so close to the volcano, is explained by the current of hot air that always rises from the Amazon and Elio Pastaza whose cold current down from the Andes.

A natural balcony that allows you to see the wonders of the city of Baños de Agua Santa and contemplate the beautiful Tungurahua volcano.

The name of this viewpoint is due to the fact that the people who were evacuated in the eruption of the Tungurahua volcano in 1999, could see from this place the activity of the volcano. In this it was possible to watch the volcanic activity of Tungurahua.

This is one of the five viewpoints that has Baños de Agua Santa located in the northern part.

How to get to Mirador Ojos del Volcán?

Via Illuchi in the Antennas sector The road passes in front of the Jorge Viteri Terminal, estimated time of the trip 15 minutes by car.

What should you know?

The viewpoint "Ojos del Volcán" has a strategic location to monitor the volcano at an altitude of 2,708 meters above sea level. This place is usually visited especially by photographers to take the best impression of the Tungurahua volcano. Depending on the weather, dark clouds can cover the beautiful view. In the place you can hear clearly the roars of the volcano.

You can go hiking to Baños de Agua Santa, this route has a distance of 10 km and must be in good physical condition. It is recommended to go with warm clothes.

Baños de Agua Santa, contains magic, adventure and many places to discover, plan your trip in www.baños.city where you will find complete information about the city and its tourism providers ..!